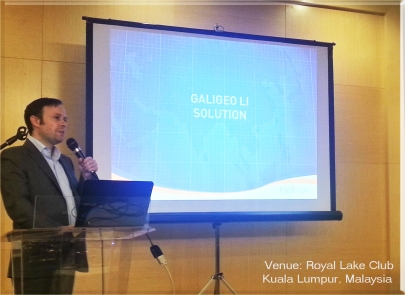 Starting with a great opportunity this year, on January 21st, CPIT Company Limited joined a one day seminar upon the discussion “Precision addressing the citizen’s need through technology”, held at Kuala Lumpur, Malaysia.

Intended for government agencies and corporations, the address reflects on the issue of leveraging location content for program effectiveness. The event itself was warmly welcomed and organized by AccelTeam, our value added reseller of Galigeo location intelligence.

The speech, introduced by CPIT senior solution consultant Jean-Yves FARGEAT, shared CPIT comprehensiveness on Galigeo LI together with case studies for government agencies. Regarding the LI case studies, the sample data also guides how Galigeo LI’s functions can fit to the needs identified, but also the solutions and benefits expected.

Furthermore, government agencies and corporations are currently recognizing the importance of location-based information and technologies. The LI knowledge shared on this occasion raises awareness on how Galigeo can help achieve ambitious goals, through a smooth integration in various preexisting solutions.

In 2012, Asia-Pacific region has reached a capital expenditure in the mobile sector similar to Europe and North America according to a report from ABI Research.

In this reports, Jake Saunders, vice president of forecasting at ABI Research, said 62 percent of the mobile capital expenditure will be invested in radio access network (RAN) deployment while EPC (Evolved Packet Core) and gateway upgrades to the core network will make up 9 percent of spending. Another key
area which operators are looking at is improving in-building wireless coverage into dense urban centers at 5.7 percent of mobile capital spending.
One of the most striking illustration of the gap that was bridged in the region is the investment in 4G networks. 63% of Asia’s carriers have LTE rolled out, are conducting trials, or have announced plans. Out of 110 networks, 10 operators (9%) have commercial 4G LTE (Long Term Evolution) networks up and running. Another 58 (53%) either have specific plans to roll out LTE or are conducting trials.

As an example, the research company highlighted several countries for which spending on LTE technology is following this trend:
In China, despite the absence of 4G licenses, China Mobile has already started investing in 4G facilities. The 655 million subscriber operator plans to ramp up its TD-LTE base station count to over 20,000 TD-LTE base stations by December and 200,000 by 2013.
The report noted that investment in telecom equipment in India also extends to 2G and 3G cell sites as the operator Idea Cellular has continued to roll out 2,270 2G cell sites and 1,176 3G cell sites in 2011.
In Southeast Asia, commercial networks were already up and running in Malaysia where WiMax is preferred over LTE, Singapore and the Philippines, it said.

In this context, Japan’s biggest carrier NTT Docomo announced it reached 2 million subscribers on its LTE service Xi, with a growth rate quadrupled between the first and second million. This demonstrates that there is a real demand from consumers for such a service and justifies the important investments observed by ABI Research.