CPIT Co., Ltd. and Sofrecom (Thailand) Co., Ltd., one of the world leaders in telecommunication consulting, led by Mr. Clement Pelletier, Managing Director of CPIT Company with executive team and CAT executive team, led by Khun Kajornsak Singhaseni, Senior Executive Vice President – Legal and Business Partner, have held a ceremony to celebrate the signature of a contract for a major consulting project. 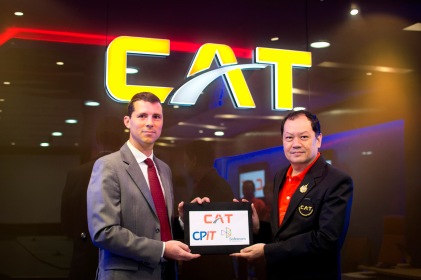 CPIT has been trusted by CAT to provide consulting services to proceed to the network assessment and valuation of the assets that True Move Co., Ltd. and Digital Phone Co., Ltd. have transferred to CAT in accordance with the concession agreements of Digital PCN 1800 as well as to propose the most beneficial solutions for asset management to CAT.

The fifth series of India Telecom conference was held in New Delhi last December. This was the opportunity to have a closer look at this enormous emerging market for Telecoms.

The Indian telecom and specifically the mobile market has been one of the biggest growth stories of the last decade. Such has been its meteoric growth that the mobile share of telecom revenue increased from a meager 34% in 2004 to more than 76% of overall revenues in 2009.Telecommunications network grew by over 40 per cent during 2010 with addition of 216.13 million connections. With 700 million connections, Indian Telecom Network is now the largest wireless network in the world.

However, the theme of India Telecom 2010 was ‘Broadband for All’ for a good reason: There is a dire need of stable policies as the broadband draws long term investment. So far, Broadband penetration in India is  not even reaching 1%, one of the lowest in the worldIn addition to these problems, the spectrum bids for both 2G and 3G have been tainted by dysfunctions and delays, generating many losses and discouraging many investors.

Indian Telecom offers without question an amazing potential growth for the investors and is likely to participate actively in the profound changes of Indian society, but it also comes with uncertainties which represent a risk for the investors this country is looking for.

The merger of the two major operators will allow 30 million of UK mobile customers to make calls and send text messages on either network for no extra cost.

This move is the first benefit for the customers to come from the partnership between Orange and T-Mobile in the UK unveiled last May. This new system will be available starting on October 5th for customers who apply for this free ‘roaming’ service.

Tom Alexander, CEO of Everything Everywhere, the company resulting from the merger, said:

The ambition goes further than simply offering an alternate 2G network to customers: Next year customers will automatically switch to whichever of the two networks has the strongest signal while they are mid-call (hand-off), and benefit from enhanced data and internet coverage through 3G